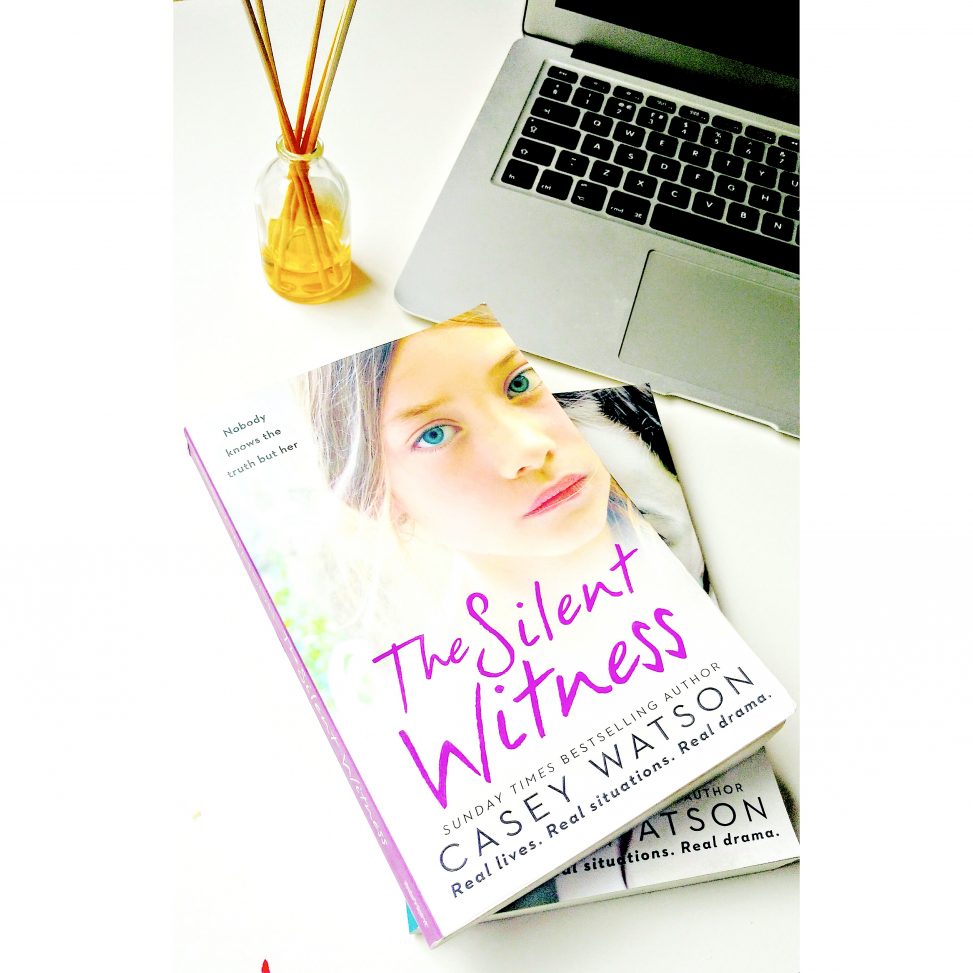 The Silent Witness by Casey Watson was a book recommended to me by the lovely Jasmine at HarperCollins who suggested I give this a read due to my love of all of the Cathy Glass books. I have read one other of Casey’s books – Runaway Girl – so was pleased so try another.

Casey is a specialist foster carer who deals with children who are particularly troubled, and has years of experience of working with difficult children. The Silent Witness tells the story of twelve year old Bella, who arrives at Casey’s house as an emergency placement late on Christmas Eve.

Whilst Bella isn’t a particularly “difficult” child, the circumstances of how she came into care are shocking. Bella was placed into care after a fight broke out at home between her mother, Laura Daniels, and stepfather, Adam Cummings, leaving Adam in a critical state in hospital and Laura imprisoned and facing murder charges after she claimed to hit him over the head in self-defence.

When Bella arrives at Casey’s, she is quiet and stubbornly refuses to to disclose any information about that night, and indeed, it takes Casey several days to coax Bella into any sort of conversation at all. The one thing that is clear is that there are obvious domestic issues within the family and Bella remains particularly loyal to her mother, and apathetic towards her stepfather, readily correcting anyone who refers to him as her father.

Essentially The Silent Witness is about the journey that Casey goes through with Bella, as she tries to encourage Bella to open up and reveal her secret of what happened in that night.

Initially, Bella’s unwavering loyalty to her mother makes us want to believe (and we hope) that she isn’t to blame – particularly as Bella clearly loves her mother very much – but with Bella’s stepfather in hospital fighting for his life, and with little evidence to suggest Bella mother is innocent – Laura Daniel’s case looks less and less hopeful hopeful and the only witness remains schtum. Further issues also arise when Casey starts to receive anonymous but threatening letters directly to her house, putting Bella’s placement with Casey at risk.

Overall, The Silent Witness has a lot of positives for for me. I am quite new to Casey, but I find as a writer, Casey’s books have been an easy read, despite the serious nature of the themes we are presented with. Also, I find Casey herself incredibly relatable and I find the term “only human” springs to mind a lot. I like that Casey regularly faces moral dilemmas and that we get to see some of her internal struggles – in particular that agonising process on whether you should go by by your gut or go by the book; ultimately, it’s interesting to see some of the decisions that foster carers have to face. However through Casey’s support, kindness, and tough conversations on telling the truth,  Bella settles and begins to disclose.

Also, there are some really touching moments, particularly between Bella and Marley Mae – Casey’s three year old granddaughter, and between Bella and Tyler – Casey’s long term placement – where they begin to form a brother-sister relationship, which helps with Bella’s integration and settlement into the family. I think this displays the importance an entire family can have with the settlement of a child, and enabling them to feel they are accepted, and in a safe and trusted environment where they can disclose. I believe it can be easier for a child to initially bond more easily with other children than adults – particularly with this situation as the adults in Bella life are all encouraging her to open up.

Knowing what Bella went through that night is heartbreaking and truly shocking, therefore, it does pain me to be critical in any way, but one of the negatives I had with this is that I found the pace of the book a little slow, and what would usually have taken me a few days to read ended up taking over a week. Everything happened quite quickly in the beginning, then there weren’t really any significant developments until the last sections of the book, and by about half way through, I anticipated how the book might end.

Saying that, Casey has written about true events, so as a reader finding the pace a little slow, I can only imagine how agonising it must have been for Bella having such little information on her mother’s case and constantly waiting for the next update to arrive, and her frustrations were expressed throughout.  So in that sense, I’m glad Casey portrayed events as they happened and didn’t dramatise anything, as this isn’t a story purely for our entertainment; this is the story of a little girl’s life.

For more information on Casey Watson and her books visit her website http://www.caseywatson.co.uk/ or you can purchase the book yourself and let me know your thoughts 🙂